I know what you said. This picture below is my materials file. 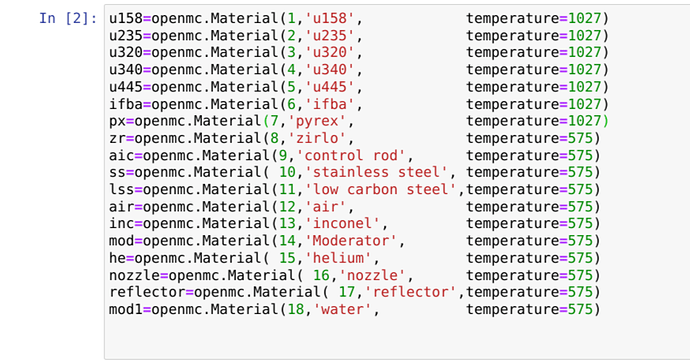 This is what i see when i run the simulation. Even if i define a different sets of temperatures, 1027 & 300 k temperatures from 2nd screenshot doesn’t change!

I’m using the XML input method (I’m not familier with Python API method).
the temperature of output is given below. 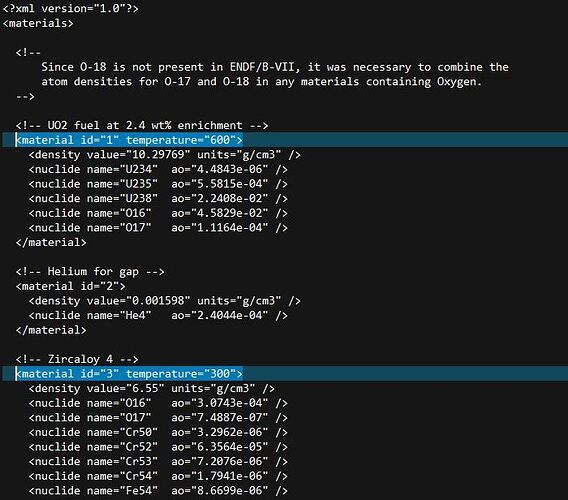 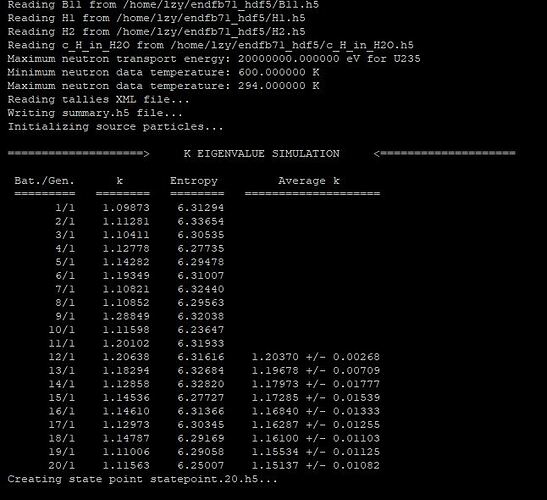 My xml input is similar to my input from jupyter notebook. But openMC shows 1027 & 300 k for no reason while running the simulation. Also, this is not for all codes. Some codes are running without any problems but some are showing such odd responses.

This might have to do with your temperature settings. I typically use:
settings_file.temperature = {‘multipole’: True, ‘method’: ‘interpolation’, ‘range’: [290, 2500]}
This captures the range of temperatures that you will need and specifies how to handle the data for those temperatures. More information on temperature settings can be found here: openmc.Settings — OpenMC Documentation

@paulromano, @mkreher13 i do have cross sections for for the temperatures 579k & 1027k. I don’t know the reasons but i copied everything from the one which shows odd behaviours & made a fresh new one. I just made the geometry file again (Basic fuel & non fuel rods). Now, OpenMC shows min & max temperatures to be 579k & 1027k. I don’t know any reason for such odd responses. But it’s solved for now.

Hi @paulromano, @mkreher13 this is related to my previous problem (model). My code is running well but i tallied to see fast neutron flux to see if it is okay. But i’m getting something like this, 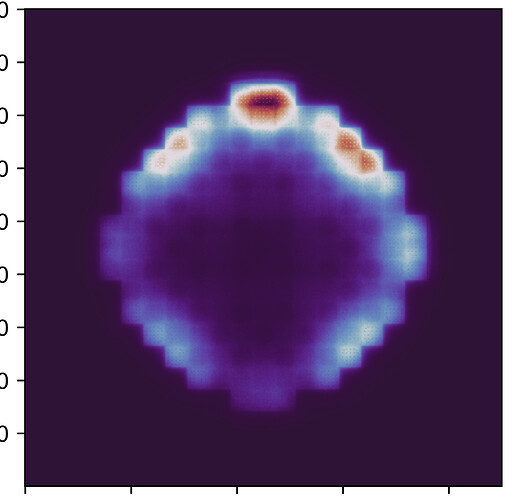 I guess this flux spectrum is not correct. It should be symmetric (90") as this core is symmetric. I tried this simulation for many times starting from 10 million to 400 million particles. But the spectrum doesn’t change. Is this spectrum correct? If not Can you perhaps tell me any reason for this? & if possible then how should i correct this?

If you are expecting symmetric results, but aren’t getting them, I first suggest you check the boundary conditions. Then, take a look at the convergence of the various tallies. Using 400 million particles sounds like a lot, but it all depends on the size of your geometry. I often use 400 million particles just to converge a single fuel rod. So if this is a full core, you probably need a lot more (also depends if it’s 2D or 3D).

I’m not sure if the screenshot you provided earlier in the conversation is your actual run, or if it was just a test case, but you see that the eigenvalue is only converged to 1082 pcm. I usually aim for under 20 pcm for the eigenvalue. The convergence of the tallies you are interested in can be found in the statepoint file or tallies.out.

@mkreher13 thank you so much. I’ll try doing that. & yes it was just a test run to see that the modeling was done without any error & it’s 2D (no axial boundary, infinite). I’m expecting a error free 2D model before defining the Axial geometry. Is it perhaps also another reason for such problem?